“If La Nina conditions develop, we predict it will be weak and potentially short-lived, but it could still shape the character of the upcoming winter,” said Mike Halpert, deputy director of NOAA’s Climate Prediction Center. “Typical La Nina patterns during winter include above average precipitation and colder than average temperatures along the Northern Tier of the U.S. and below normal precipitation and drier conditions across the South.”

Wetter-than-average conditions are favored across most of the northern United States, extending from the northern Rockies, to the eastern Great Lakes, the Ohio Valley, in Hawaii and in western and northern Alaska.

Drier-than-normal conditions are most likely across the entire southern U.S. 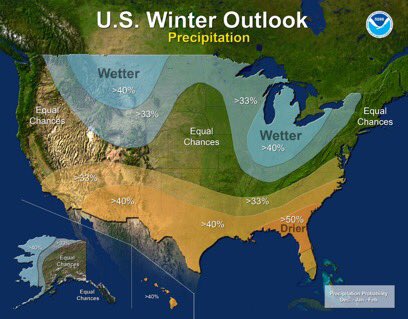 Warmer-than-normal conditions are most likely across the southern two-thirds of the continental U.S., along the East Coast, across Hawaii and in western and northern Alaska.

Below-average temperatures are favored along the Northern Tier of the country from Minnesota to the Pacific Northwest and in southeastern Alaska.

The rest of the country falls into the equal chance category, which means they have an equal chance for above-, near-, or below-normal temperatures and/or precipitation because there is not a strong enough climate signal in these areas to shift the odds. 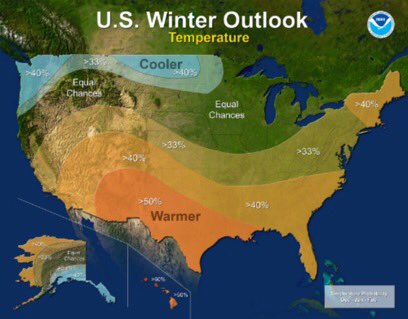 Despite the outlook favoring above-average precipitation this winter, drought is likely to persist in parts of the northern Plains, although improvement is anticipated farther West.

Elsewhere, drought could develop across scattered areas of the South, mainly in regions that missed the rainfall associated with the active 2017 hurricane season.

NOAA’s seasonal outlooks give the likelihood that temperature and precipitation will be above-, near, or below-average, and also how drought is expected to change, but do not project seasonal snowfall accumulations. While the last two winters featured above-average temperatures over much of the nation, significant snowstorms still impacted different parts of the country. Snow forecasts are generally not predictable more than a week in advance because they depend upon the strength and track of winter storms. The U.S. Winter Outlook will be updated on November 16.