RAIN FOR SATURDAY BUT SUNDAY LOOK NICE AND SUNNY

Im beginning to get a little more optimistic for Sunday. Certainly from the standpoint of rain we will be done before daybreak Sunday. The issue maybe how much leftover cloud cover there will be and whether we get into some sunshine. I think we will see some sunshine as the day wears on. In fact if the GFS is right, Sunday could wind up being partly to mostly sunny for much of the area with no showers to worry about at all!

Lets look at the satellite and the gfs for 2pm today so these two match up pretty well. You can see last night’s weather system is offshore and we are drying in between and you can also see the next disturbance entering the midwest and the Ohio Valley. There is drying in between so we are at least enjoying half way decent weather for the rest of today and tonight. Clouds from the next system will be reaching us later today and early Saturday. 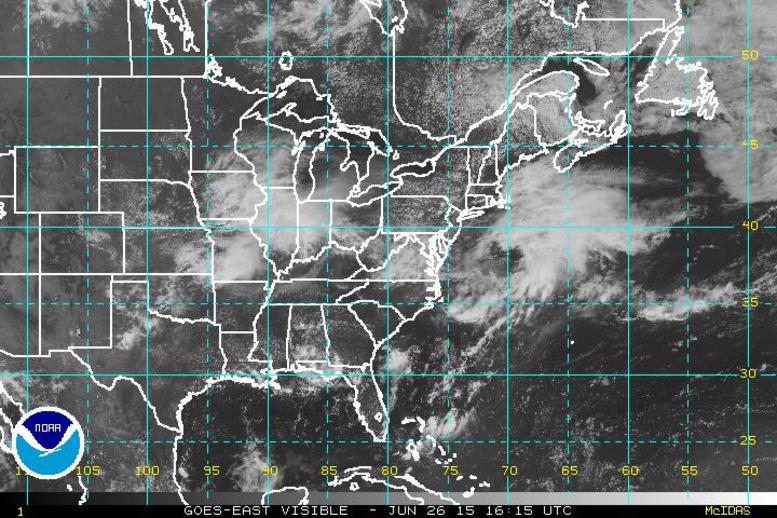 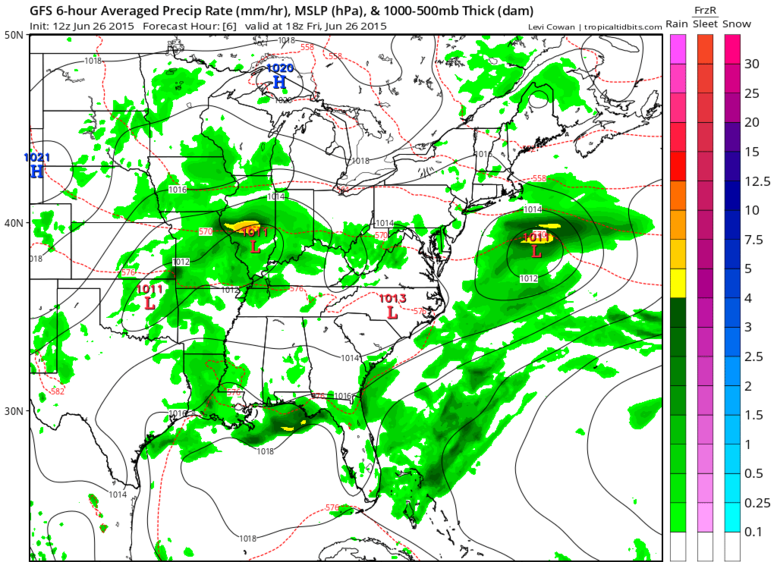 By 2pm Tuesday you can see that the low in the map above in southern Illinois becomes the wrapped up low in northeast Ohio. The rains with that are on the doorstep of the coast but they have already spread across Eastern Pennsylvania and New Jersey before early afternoon. The rains will then continue to spread northeast and should cover everyone by late in the day. A system like this in late June is highly unusual as it looks like something you might see at colder times of the year 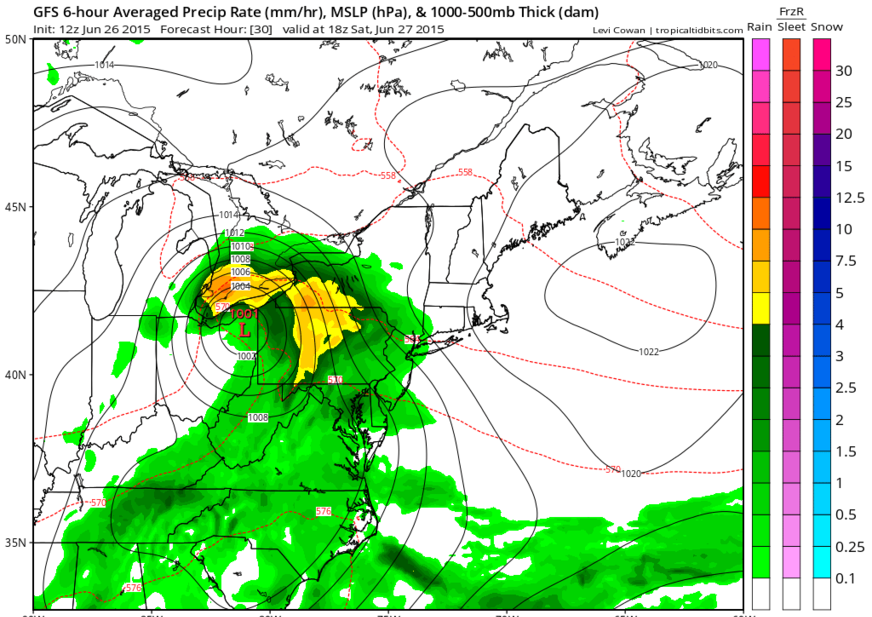 What we have is very amplified upper air pattern across much of North American which results in an unusually deep closed low/trough in the upper atmosphere that is moving eastward. This is a signature pattern of wet and cooler weather in the east and particularly the northeast. Warm sector thunderstorm potential shifts southward because we have a strong southeast flow here off the ocean. That feeds in lots of moisture and you cans see the outcome with the heavy measurable rain being showing throughout much of Pennsylvania. Any severe weather from this is likely to be from Delaware and Maryland south and the Storm Prediction Center indicates this on their forecast for severe weather for Saturday and Saturday night. 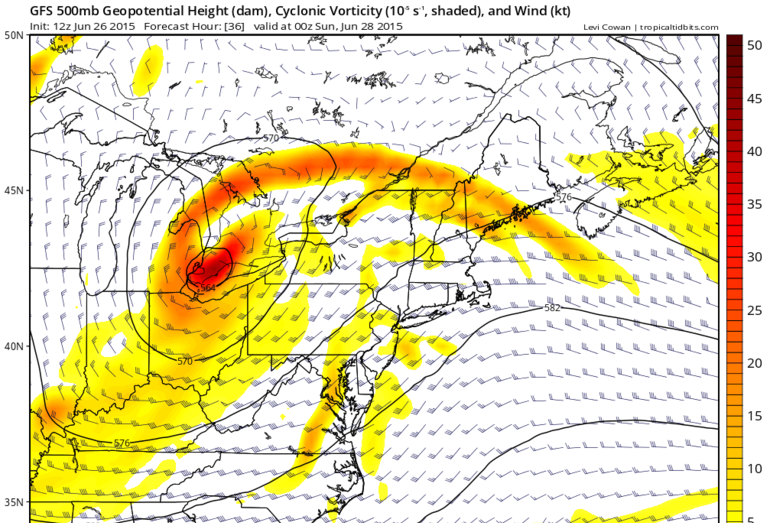 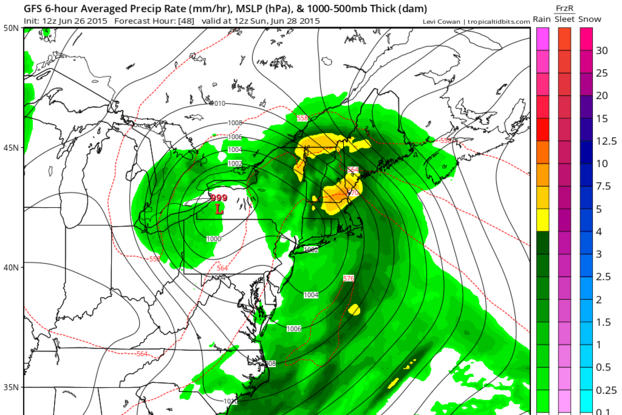 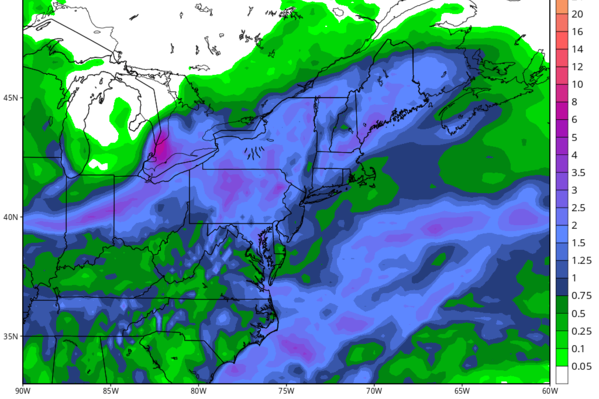 Since this strong system is moving along and tracking to our west and north there is no danger in getting into a prolonged onshore flow. The associated cold front with this is moving offshore Sunday morning and the map is drawn above for 8am Sunday. By this time all the rain should be overwith everywhere and in fact skies may have already at least partially cleared out across New Jersey and Eastern Pennsylvania, though there may be some stubborn stray dead clouds inland for awhile. One thing that stands out is the relatively tight pressure gradient that is shown so that it might get at least breezy from the southeast along the coast later Saturday and Saturday night and then breezy everywhere with a west wind on Sunday. With the late June sun and a west wind, assuming there is sunshine on Sunday, temperatures will have no problem getting into the 80s and humidity will be low. 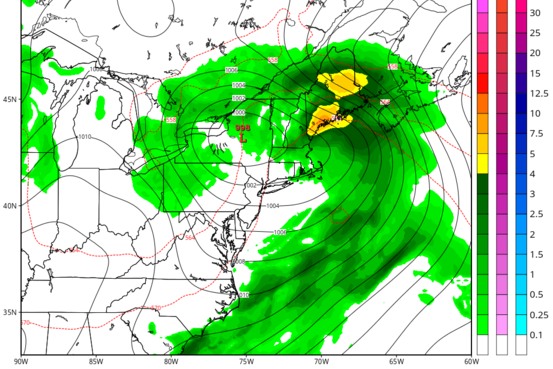 If you look at the map for Sunday afternoon 2pm you can see all the rain by now is up in Northern and Eastern New England and we are nice and dry and with plenty of sunshine with just a few passing fair weather clouds Sunday afternoon. So if you have outdoor plans for Sunday I think that they should go off without a hitch and in fact it might be a pretty good beach day too though the west wind will be a bit on the gusty side.