JOESTRADAMUS ON THE 4TH OF JULY HOLIDAY WEEKEND

The pattern shift that occurred a week or so ago continues to hold sway over the United States. The ridge that was holding south of 35 North is gone and has been replaced by an unusually deep east coast trough and as we move into the new week we do not see that changing in the overall picture. What is changing is the extreme nature of the trough that we say yesterday and still see today will relax a bit. However there also appears to be a lot of upstream activity that will be sending disturbances through on a fairly regular basis. Each one will bring with it the threat for showers and thunderstorms. As far as summer time heat is concerned that is nowhere to be found in the northeast or even the mid atlantic with this pattern. Overall temperatures will be averaging below normal. Outside of the occasional very warm day it will be difficult here to string together any 90 degree days.

The upper air map below shows just how extreme the jet stream pattern is with a very deep trough and strong upper air winds that go all the way down to Northern Florida and the southernmost Gulf states. On the opposite side of the equation to offset the deep trough in the east is the strong ridge in the western states where a heatwave continues there along with super dry conditions and the threat for wildfires. 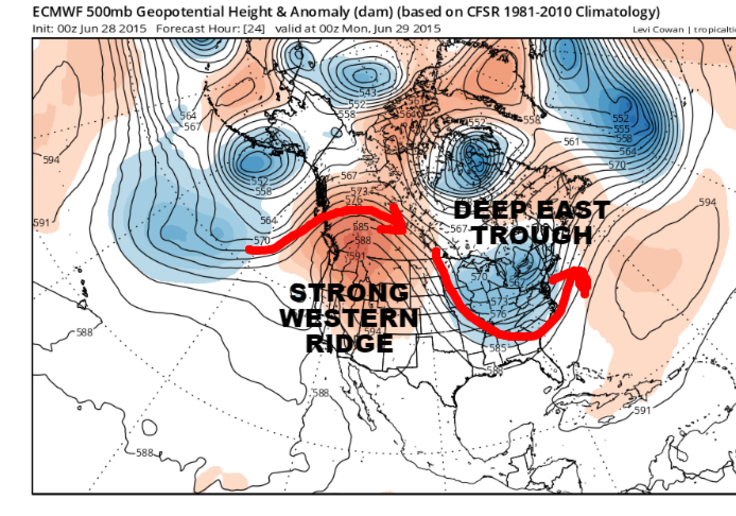 Im going to jump here from tonight to the Tuesday night upper air map where you can see that the next weather system for the east is already lining up to bring another round of showers and thunderstorms. This trough follows the one today which pulls out and with the vortex in Northern Hudson Bay holding firm, the next trough drops right into position around 85 degrees west longitude. Winds aloft go southwest ahead of it. This trough is not nearly as deep as the one we just experienced but there is certainly enough there for more rain but perhaps it won’t be as wide spread and more convective in nature. Look for those showers and thunderstorms to approach later Tuesday and Tuesday night. Dry weather conditions will take hold from tonight into Tuesday. 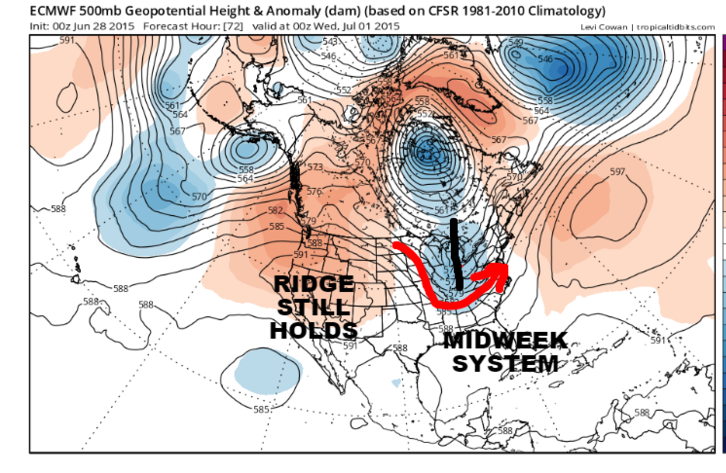 Once that system moves out later Wednesday we get a break and then another one approaches for the end of the week. Notice however there is a bit of a difference here in the structure of the upper air. The troughing in the east is much more broad in nature as the ridge in the west flattens out a bit. This could mean several things including the fact that it appears there could be several weaker systems running around in the flow. The result of this is that there could be several threats of showers and thunderstorms along the way from Friday and going into the weekend. 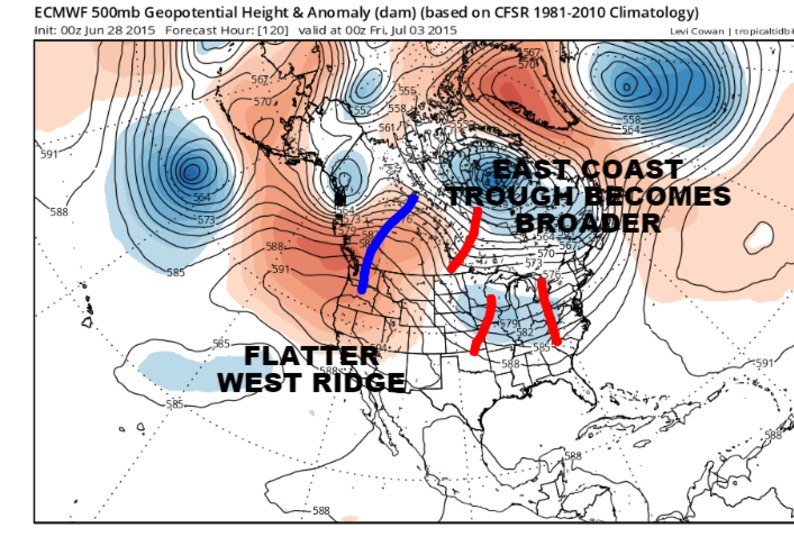 The problem with weaker systems running around like this is that it makes the day to day forecasting a little tougher in terms of timing and in terms of how these systems wind up interacting with each other. I don’t think it will be a scenario where it rains all the time and there will be dry periods. However there will be enough variability where one may need to plan around the threat for showers possibly right through the Friday through Sunday timeframe. 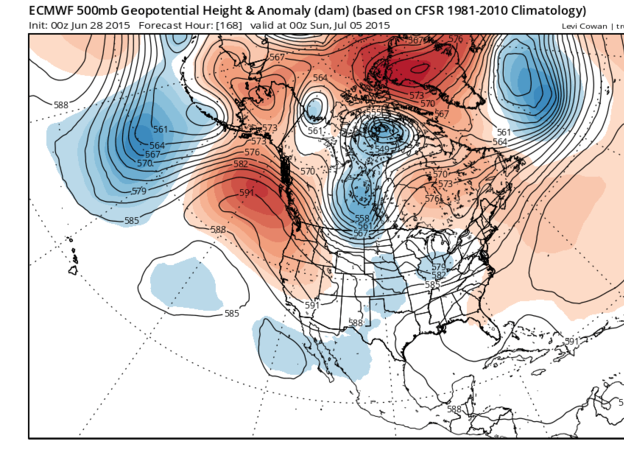 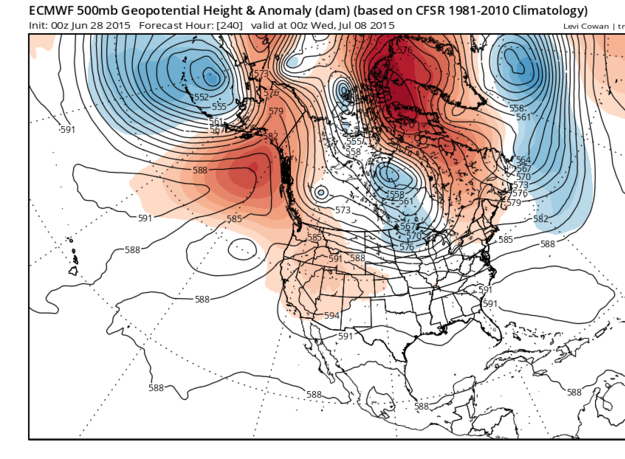 Juming ahead to Sunday and then early next week not much changes. There are hints of changes on the 240 hour with the trough perhaps shifting a little further west however I don’t have much confidence here to make any type of call that far into the long range. Even Joestradamus has limits. The ridge in the west is still there. There is ridging off the southeast coast. But this could wind up playing out in a number of different ways.

In summary, it looks like an unsettled period of weather coming up over the next week to 10 days. No very hot weather is in the cards..more rain is from time to time and expect variability in the day to day forecast that is probably a little higher than usual.