WEEKEND FORECAST AND THE TROPICS MAY AWAKEN NEXT WEEK!

We are at the last weekend of July and the dry air mass that has been with us since Wednesday continues to be in control at least for the start of the weekend. Temperatures are going to edge a little higher on Saturday but the humidity will still be okay and there should be a good amount of sunshine. Any outdoor plans are all systems go and no shower or thunderstorm activity is forecast for Saturday. Now if we think back to last weekend as we made the transition to a more humid air mass (last Friday night into Saturday morning) we had clouds come in with a few downpours. This weekend looks like a repeat performance is possible late Saturday night/early Sunday morning with the possibility of a few scattered downpours or a thunderstorm as the warm humid air arrives. There is also the chance for showers and thunderstorms late in the evening but they should be scattered in nature. In between there will be a mix of sun and clouds. Highs both weekend days will be in the 80s though the humidity on Sunday will be higher. Still I think all outdoor plans should be okay. 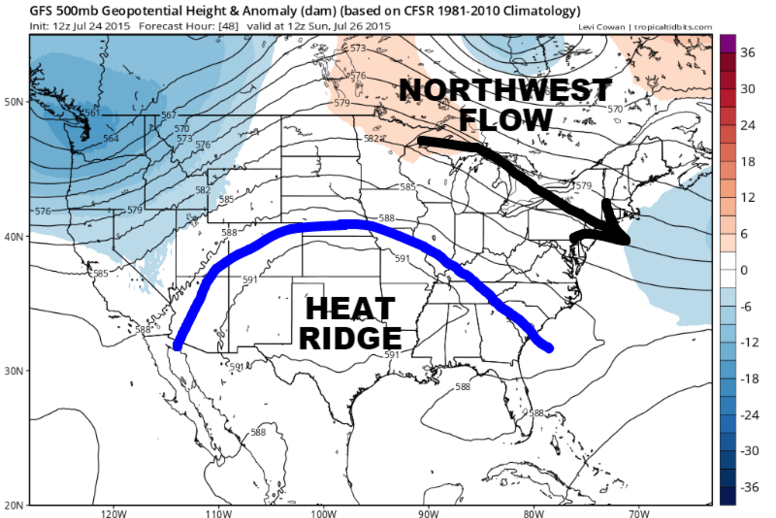 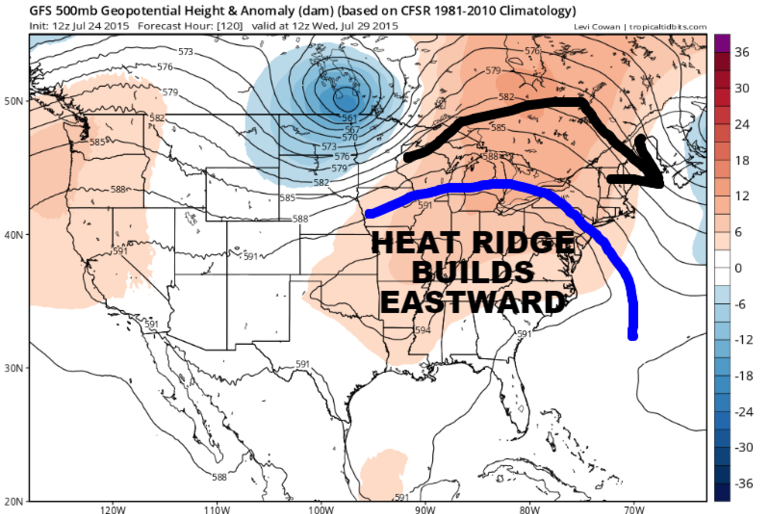 As move into the first part of next week notice the upper air maps above for Sunday and then for Wednesday and what happens to the pattern. The northwest flow over us relaxes and pulls northward while the “heat ridge” in the west builds into the Eastern states. If the GFS is correct on this then we are going to see 2 days of heat again much like what we saw last week with temperatures at least in the low to mid 90s. The 2 days would be Wednesday and Thursday. Tuesday could see temps near 90 as well. 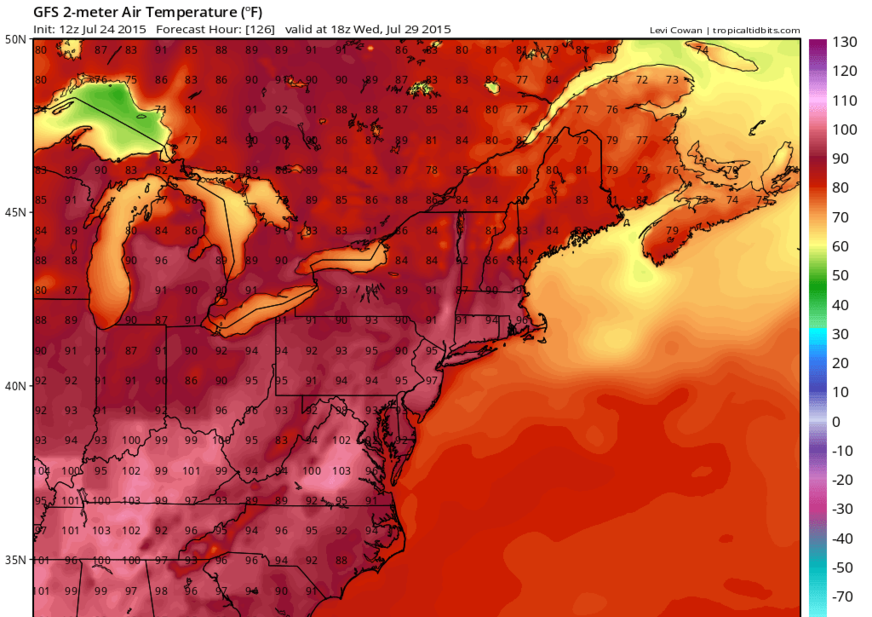 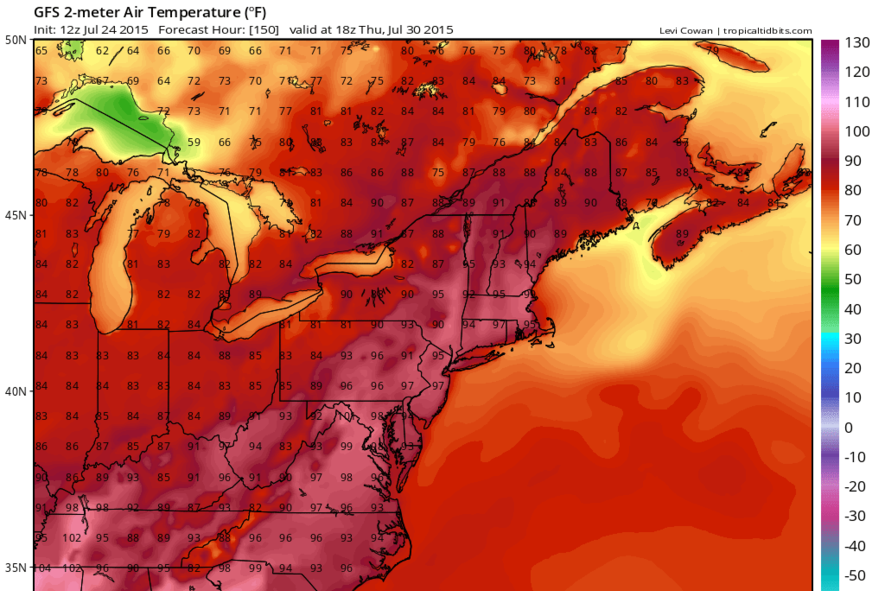 Now to the longer range for later in the week. The two maps below are the European and GFS upper air maps for Thursday morning. They look about the same with regards to the upper air pattern with one notable difference and that is what is off the southeast coast on the European. The European develops a tropical storm and actually strengthens this to a hurricane as it passes well offshore the east coast on Friday of next week. The gfs has absolutely nothing!!!! The Canadian which is not shown here has a weak system that goes north of Bermuda! The European is insisting on this but of more importance to me is that trough in the northern stream. Earlier European model runs had a much deeper trough than what this day run is showing. That is important. If the trough remains broad as shown, even if something does develop and that is a big if, it would be a marine event. 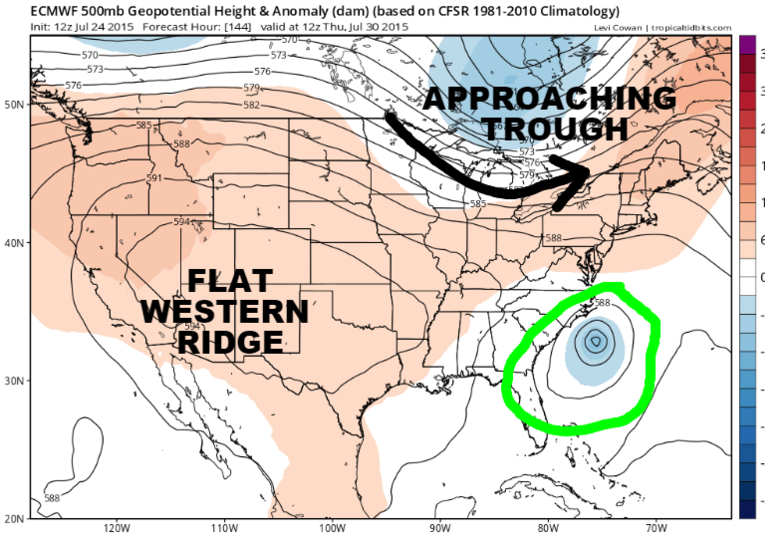 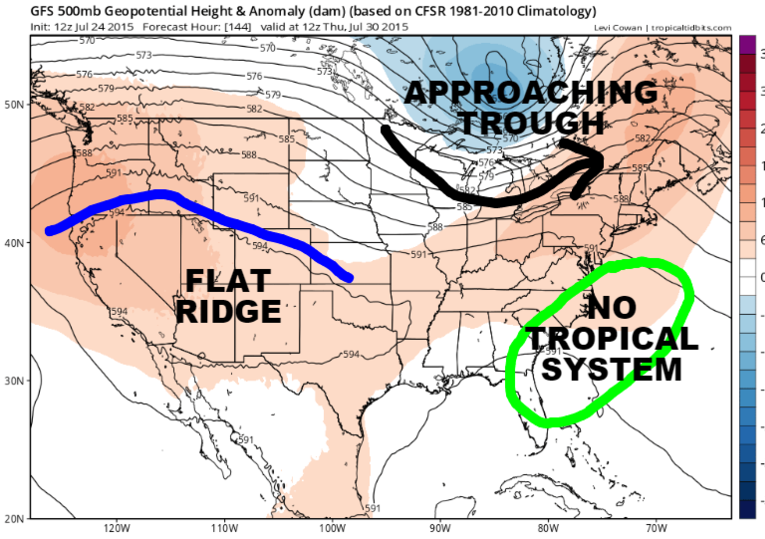 The biggest difference in this model run for both the GFS and the European is that unlike last night, the ridge in the west is much flatter which means the trough in the east is not as deep. This actually matches up well with last night’s Canadian run that argued for a much flatter look.

At this stage of the game it is way way to early to figure out if this is correct or are we are going to go back to a more amplified look like we saw last night and on several runs past. It seems to me that we have already seen 3 home brewed storms develop. In other words we have seen three tropical storms form outside of the deep tropics and instead they all formed in the subtropical regions of the Atlantic basin. The European usually has a better handle on these tropical systems when it shows in days away and given the upper air pattern, it seems certainly possible that something may try to develop off the southeast coast. However unless the upper air pattern becomes amplified, it would not be of particular concern. Needless to say we have a long way to go and lots of models to look at between now and then. Either way it would be a matter of something offshore verses something well offshore given what I am seeing at this point.

Read my earlier Joestradamus piece which addresses the upper air pattern and the possibility of tropical storm development along with other long range issues.