It has been a very interesting summer so far from a number of angles. The heat has been relatively tame with only occasional visits to the northeast for a day or 2. We have seen 2 nice intrusions of lower humidity and sunshine with reasonable temperatures. Thunderstorms have been around too with some places seeing more storms then others. We are currently coming to the end of the latest comfortable air mass and August is just a week away. We are in the summer peak with regards to climate and average temperatures. The tropics have seen 3 home brewed tropical storms with 2 hitting land..one of course from back in May. Now moving forward we have a few things going on that will lead to some more interesting weather. Some heat is likely to return for a couple of days next week. Models especially the European are also pointing to another home brewed tropical storm possibility late in the period.

Lets begin with the shorter term as we move through the weekend we will see a return to humidity by Sunday and the chance for some thunderstorms but Saturday looks very good and even Sunday we will have some sunshine with any thunderstorms scattered in nature. Early next week the stage will be set for a return to 2 days of heat and humidity with Wednesday and Thursday looking like the hottest days. The European model and the other models as well have us on the eastern edge of the heat ridge which would bring 90s here, much like what we saw last Sunday and Monday. 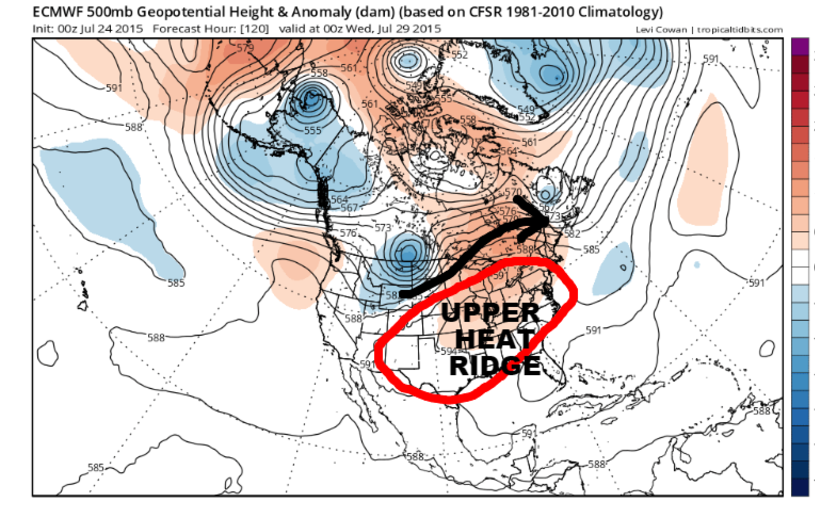 Now a couple of things begin to happen between Tuesday and Friday. First off we have the heat ridge gradually shifting westward which allows the jet stream along the Canadian border to move back south. This is the reason why the heat gets cut off after a couple of days. It is the area between the ridge in the west and the ridge in the Atlantic (a.k.a Bermuda high) that we see an area of falling pressures over and just east of the Florida coast. It is here that the model is indicating that there could be some sort of tropical development. In the meantime here we will be cooling off with temperatures getting back to something closer to normal and way from the 90+. 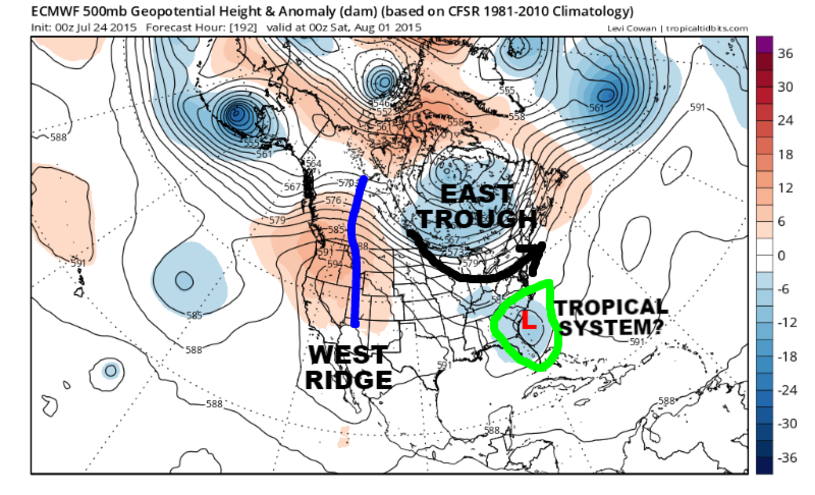 As the week closes the European shows a strengthening ridge in the west and a trough in the east. The east coast trough is rather broad which means that the flow gradually backs to southwest along the east coast. The model shows what might be a tropical low off the southeast coast at this point. It is here that we should strongly point out that this is very speculative at this point as we are looking at this in the broadest context. We have absolutely no idea what will actually be there and all the other factors that go into tropical storm development. 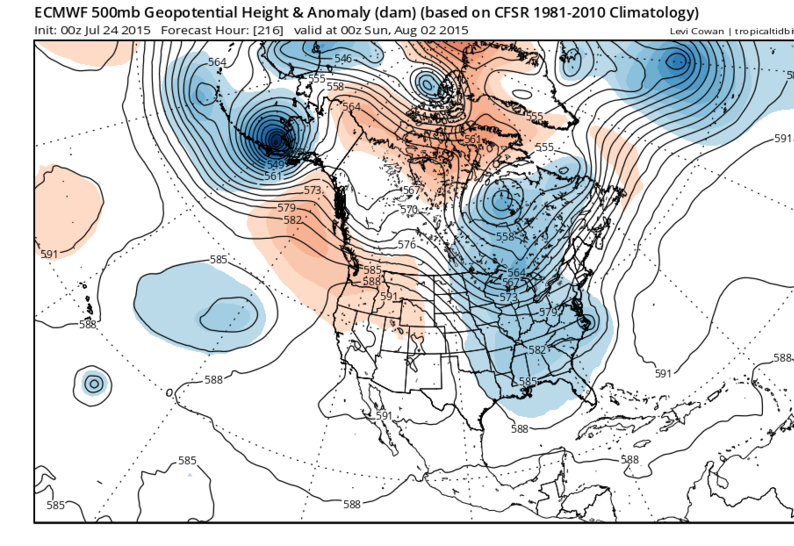 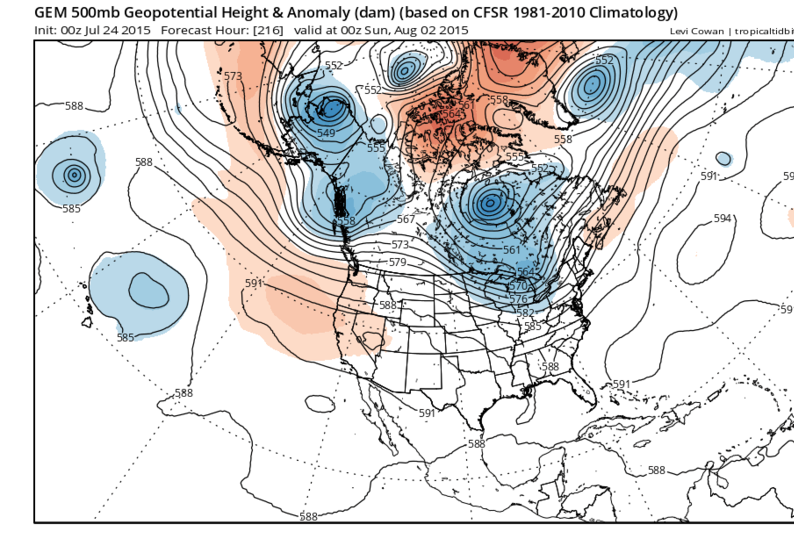 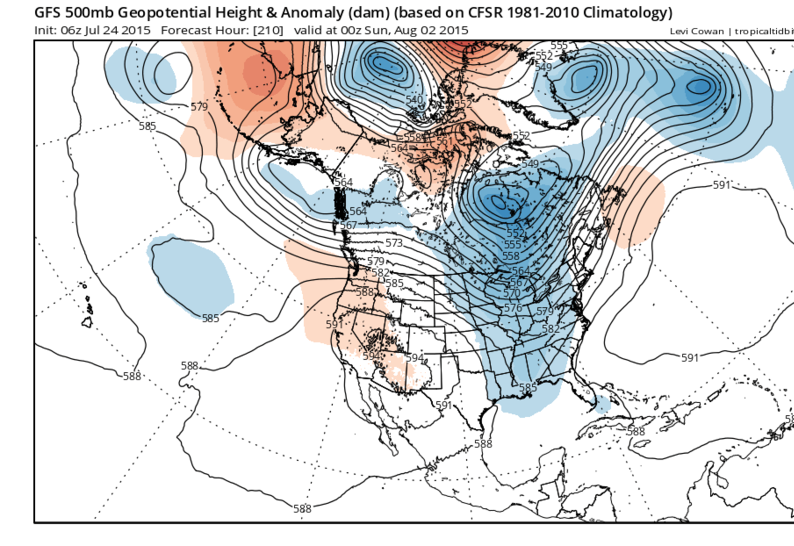 Now what I have done above is put out up all three models with the European on top, the Canadian in the middle and the GFS at the bottom. Now here is what similar with all three. All three have the ridge in the west and the trough in the east. The differences lie in the strength of these features. In particular the Canadian model in the middle which is the flattest of all three. The GFS actually has a sharper trough in the east then does the European. The European reflects the tropical system right over eastern North Carolina and would imply a north northeast motion from there.

Here are a couple of conclusions regarding this. First off this is 9 days from now so right there it tells you that much will change. The models have been showing this for days now in various forms so it probably means we need to at least acknowledge the possibility but there is much that can make this an entirely different outcome.

If this is going to be an issue the key among so many others will be the strength of the east coast trough and whether that trough winds up being deeper and left of this current forecast or is it going to be more like the Canadian with a much flatter look to the jet stream and would imply no problems with a system going well offshore.

At this point we regard this as just something to keep an eye on in the long range and focus on the fact that at least through the middle of next week, the pattern of dry weather followed by a few days of heat and humidity with the occasional thunderstorm threat is likely to continue. In the long long term, the trough in the east suggests that the beginning of August will start off with near or even below normal temps.